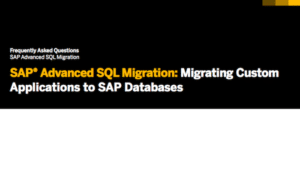 SAP’s Advanced SQL Migration tool greatly simplifies migration of custom applications to SAP, removing as much as 90% of complexities. Version 3 has just been released.
SAP Advanced SQL Migration supports the following source DBMS types:
• Oracle; versions 9, 10, 11
• Microsoft SQL Server; version 2000s – 2012
• IBM DB2 UDB for LUW; version 9.x (NB: PL/SQL-compatible extensions are not actively migrated, although some aspects may be converted correctly)
• Teradata, version 14 or later Note: Teradata can only be migrated to SAP Hana
For all of these source DBMS types, later (or earlier) versions than listed above have not been actively tested. The migration tool may however still work for such versions, or work partially.
Currently, the following target DBMS types and -versions are supported:

This excellent tool is available for use only by SAP and its partners.  Get in touch to explore how it could help your migration project.